The new freedom of reception: Conversion of DVB-S(2), DVB-T(2) and DVB-C in DVB-C or DVB-T

The new compact headend series PCU 4000, PCU 8100 with triple tuners and PCU 8000 with DVB-S/S2 tuners offer all freedoms in the project planning of community reception systems due to triple tuners: 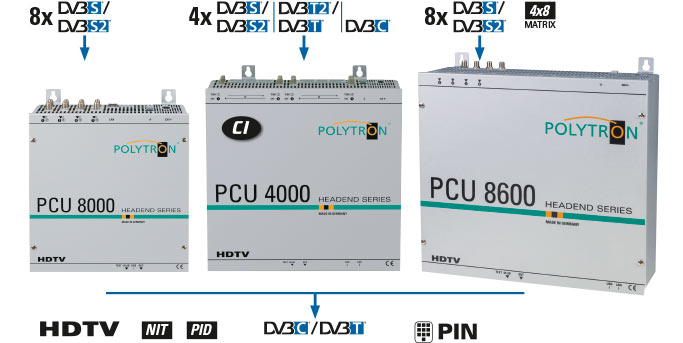 The innovative triple tuners of the PCU 4000 and PCU 8100 headend series allow to determine the type of reception of each single tuner independently and flexibly.
DVB-S(2), DVB-T(2), DVB-C or all three – you can decide depending on the given conditions what the headend has to convert. Very easy with only one mouse click in the programming software.

With a PCU headend you have the possibility to process the data stream. You can remove, for example, unwanted programmes of a transponder, create a LCN allocation and program the headend to a provider-specific receiver (NIT). You also have the option to split the contents of a transponder to two output channels in order to avoid e.g. bandwidth restrictions.
The PCU 4000 and PCU 8100 series headends are available with four built-in common interface slots, enabling a central decryption for the community system.

The PCU headends’ output signals can be changed easily from DVB-C to DVB-T and vice versa by a firmware update. The PCU headends are completely flexible and universal applicable.

Flexible setting of the parameters

The easy PC programming and the integrated LAN controller allow flexible and reliable management of the headend. 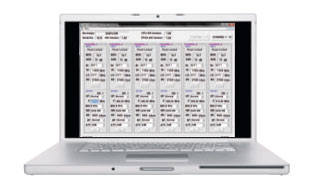 Uncompromising: Made in Germany

The high quality of the components and the elaborate technical design increases the lifetime of each POLYTRON headend. Once installed the system provides the subscribers with high-quality TV and radio signals over years.