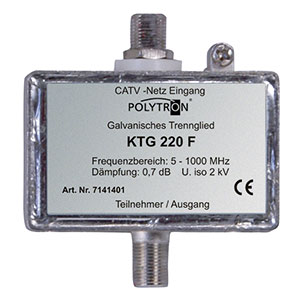 With increasing CATV distribution, difficulties arise at house connections because of potential equalizing currents.
Large potential differences result in remotely fed CATV systems due to large currents through the cable core and shielding.

This results in unacceptly high equalizing currents after the house connection point even when correct connection has been made with the earth potential of the current supplies.
The electrically strong capacitive separation of the KTG between cable core and shielding is the ideal solution for such problems.